About Us Buying Guides
Diamond 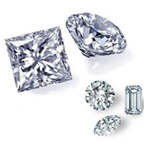 All diamonds are precious and those possessing the highest quality of cut, colour, clarity and carat weight (the four Cs) are the rarest and most valuable. At Biagio the Jewellers, we believe there is a fifth C - confidence. Confidence in the source and craftsmanship of the diamond. This is, to Biagio, as important as the essence of the stone itself.At Biagio the Jewellers, we believe that we can find you your perfect stone at a price that suits your pocket, and can design an exclusive piece of jewellery with your chosen diamond.As the supreme gemstone, the diamond owes its name to the Greek adamas, meaning invincible. Invincible for the power believed to be granted to the wearer; invincible for being the hardest mineral known to man; and invincible for its brilliance. Diamonds were created almost 80 million years ago, when pipe-shaped accumulations were pushed upwards at huge speed from inside the earth by a series of violent explosions, creating conditions favourable to the crystallisation of diamonds from whatever carbon was available. Diamonds have been used in jewellery from very early days, but it wasn’t until diamond cutting was developed in the late 17th century that their beauty was revealed. The brilliant cut, today’s standard cut, has 58 facets, their size and shape and the angles between them intricately calculated to create both internal and external reflecting and refractive surfaces, with the aim of providing the maximum brilliance.

Cut is the only one of the four Cs influenced by man. There are many differnet types of cuts to choose from. A good, round brilliant cut releases the life and sparkle of a diamond through the arrangement and proportion of its 57 or 58 facets. Light reflects from facet to facet and disperses through the top of the stone, creating a display of brilliance.

While most diamonds appear white, many display hints of colour barely discernible to the naked eye. The closer a diamond approaches colourlessness, the rarer and more valuable the stone. Diamonds with a strong pure colour are extremely rare and are called ‘fancies’. Amongst them can be found pink, blue, green, orange, yellow and even black. The rarest are blue and pink.The scale defined by the European Gemological Laboratory (EGL) is divided into steps between D and Z, D being the clearest and most valuable:D-E: exceptional white; F-G: rare white; H: white; I-J: slightly tinted white; K-L: tinted white; M-Z: tinted colour.

A diamond’s clarity is determined by the degree to which it is free from naturally occurring inclusions, often called ‘nature’s fingertips’. The number, type, colour, size and position of the internal birthmarks can affect a diamond’s value. However, many are invisible to the naked eye and require magnification under a standard 10x magnification loupe. The fewer inclusions, the rarer the stone.The EGL Scale of Clarity refers to the amount of inclusion in a stone when viewed through a 10x magnification loupe:

Carat refers to weight and therefore the size of the diamond. One carat is divided into 100 points. A diamond weighing 50 points equals half a carat. Two diamonds of equal size can have very different values, depending on their cut, clarity and colour.