10 Rare Gemstones And Why You Should Want Them

Diamonds are a girl’s best friend or so the song goes, but coloured gemstones are on the rise and these ten gemstones are rarer than most, making them especially desirable. In many cases their scarcity makes them far more valuable than better known jewels like diamonds, rubies and emeralds. So broaden your gemological horizons and let us introduce you to some fabulous new friends. 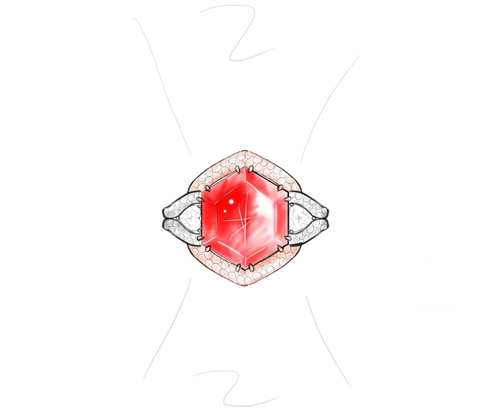 Sphalerite can be found in a range colours from yellow (known as Cleiophan) to brown-black and from blue-greens to red (also known as Ruby Blende or Ruby Jack).

It has a dispersion (it’s ability to refract white light into the colours of the spectrum) that exceeds all other popular gems and is 3 times that of diamond, lending stunning fire to its colour.

Very unusual to find in jewellery as it’s an extremely difficult stone to cut and polish, due to its softness and cleavage. It is easy to ruin a stone unless handled with extreme care by an expert cutter. As you can see from the design above, Biagio has not only managed to find a beautiful example of this gem and designed a ring that enhances its fire but has just such an expert cutter to craft it too. Biagio has sourced a clear-red 28ct Sphalerite, only found in Cantabria, Spain. This ring design is one-of-a-kind, set with two exceptional heart-cut in 18ct rose gold and white gold and will be available shortly. Check back soon. 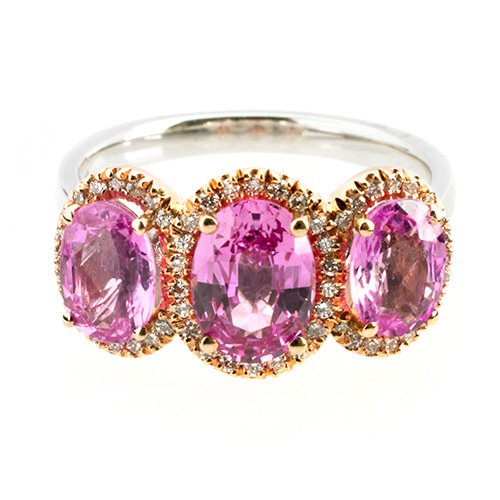 Sapphire is another gemstone that can be found various colours other than the typical blue, with pink being amongst the rarest. Ranging in shade from palest baby pink to vivid magenta, the most coveted shade is deeply-saturated purplish-red often described as hot pink.

The scarcity of pink sapphires means that stones over half a carat are not cut into calibrated sizes with each stone being cut to include as much of the rough stone as possible. Most are given a mixed-cut treatment as a result.

Originally trademarked by Tiffany & Co. this stone was named for Tanzania where the only known deposit in the world is found in the foothills of Mount Kilimanjaro. It is thought to be 1000 times rarer than diamond due to its lack of natural distribution, however, it also highly sought after for its dramatic shifts in colour. As you turn a tanzanite through various orientations and in different lights, the same stone will appear to change from blue to purple and through to red.

Tanzanite wasn’t found in quantities great enough for commercial use until the 60’s but is now the 2nd most popular gem after sapphire. Its meteoric rise may well lead to prices skyrocketing as the only known deposits in Tanzania are mined out, making this stone ripe for investment now. 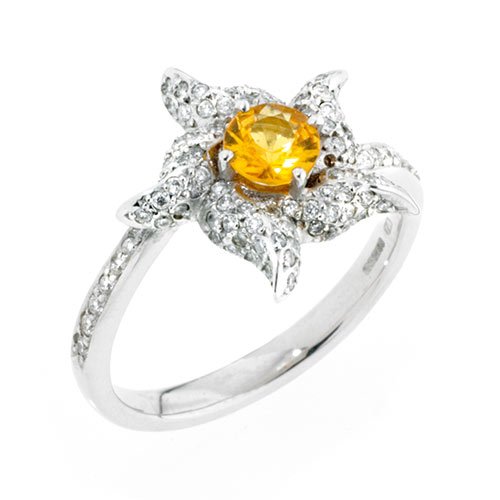 Whilst not quite as rare as the pink, yellow sapphire is still less common than most, with the added bonus of being amongst the more affordable of rare gemstones. It’s sunshiney summer hues have become greatly popular as engagement rings and what’s more, they are available in a greater variety of shades and cuts than the more costly yellow diamond.

From pastel light lemon to orange-yellow and golden tones, there is a shade to suit any preference, though it’s the cut that’s most important with this stone. A poor cut will look dull and lifeless, whereas a skilled cutter can allow the lightness and colour to shine out. 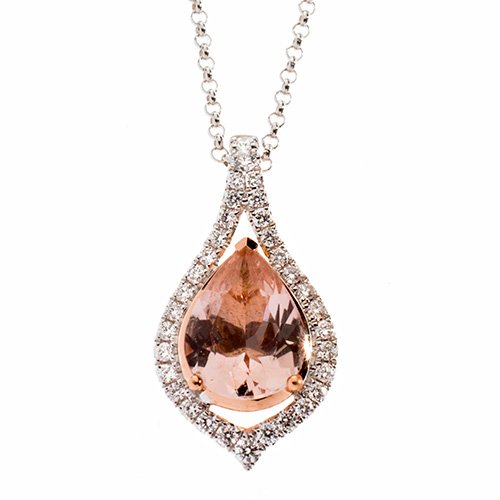 Soft-pink to orange-pink Beryl is known as morganite and is named after that legendary financier J.P. Morgan. Untreated it’s a salmon-pink colour and strong, intense colour is extremely rare. Morganite stones have to be large in order to achieve a depth of colour and so colour is seen as the most important factor for this pretty gem. Most prized are the strong pinks and magentas but watch out, stones of this colour are often heat-treated in order to obtain such tones.

Morganite is a good cutting stone, so it is often fashioned into more creative pieces, making it a favourite among designers.

Loved for its unique iridescent play of colour, Labradorites of exceptional colour are often termed ‘spectrolite’. Rarely seen in mass-market jewellery, it is mostly used by designers and jewellers for their most unique and custom work.

Usually clear white or greyish, stones tend to include flashes of blue, green, yellow, orange and red. As you might have guessed this stone is named after the location of its discovery on the Isle of Paul in Labrador, Canada in 1770. 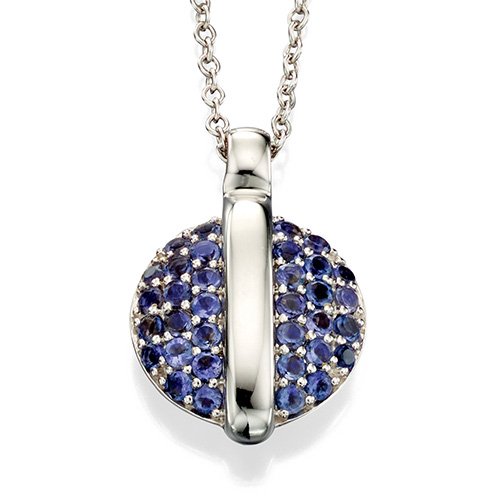 Legend has it that Iolite was used as an early form of sunglasses by the Vikings, who would hold thin slices in front of their eyes to shield them from the sun’s glare when checking its position in the sky.

Named after the Greek word ‘ios’ meaning violet, it has a blue-violet hue but can appear pale lemon or even colourless depending on direction. Generally untreated, it must be cut with care to bring out the best colour. 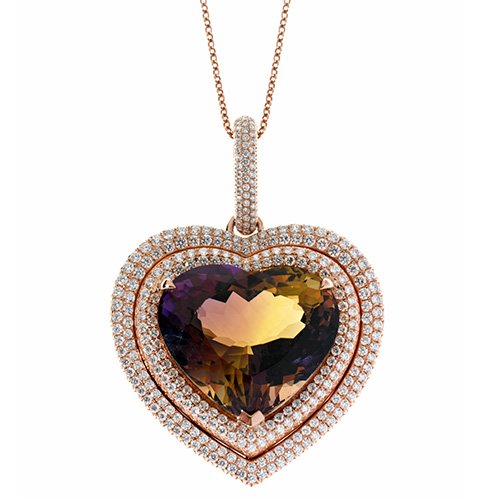 A transparent quartz with the colours of both amethyst and citrine, which join to form its name. This gem is highly prized for its bi-colour nature of mauvey-purple and yellowy-peach. The way the colours combine and contrast differs in every stone, therefore making no two examples alike. Every ametrine owner can be assured that their stone is utterly unique, and it’s because of this uniqueness in colour blending that Ametrine is also a cutter’s delight, as they must find constantly new ways to maximise the play on colours.

There is only one commercially viable source for this stone, Anahi mine in Bolivia, thus making it rare by virtue of its limited supply as well as its undeniable beauty. 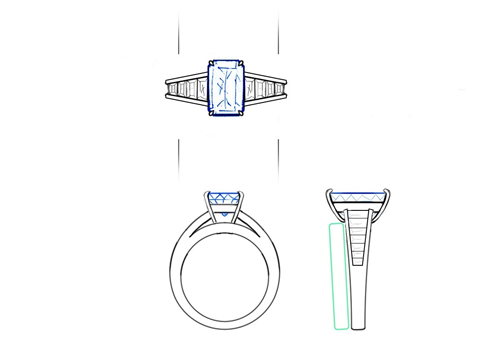 Not commonly known among jewellery buyers, zircon is typically blue-green though can be found in a variety of colours ranging from autumnal-earthy tones of cinnamon-red-browns to yellows and greens. It is, however, the blue which is especially admired.

Zircon is one of the most brilliant of all the non-diamond stones, though it is highly challenging to cut due to its brittleness. A desirable stone in the 1920’s and 1930’s, cutters will typically use a modified version of the brilliant cut known as the zircon cut, which uses eight extra facets in the lower part of the stone or the pavilion. As a result of this labour-intensive cutting method, zircon is not seen often today, as designers and jewellers pick easier, though perhaps less brilliant stones to use. Biagio hasn’t shied away from this stone though, as can be seen with this latest design, preferring to put the quality of gem above other considerations. Whilst the crafting of this piece may take a little longer than most, we hope to have it in-store soon. Watch out for updates on this rare and gorgeous item. 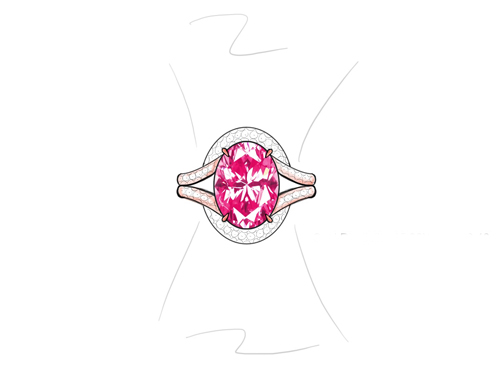 Another stone coming soon to store is set in the above design by Biagio.

From the garnet family, Rhodolite is raspberry-red or sometimes purplish-red and is a combination of pyrope and almandine in composition. It is named after the greek for ‘rose’.

Brighter than common garnets as it lacks their brownish tinge, the raspberry-red colour of rhodolite is virtually unique in the gem world and it is because of this that they make it onto our list of the ten rarest and most highly sought after stones.

Typically found as water-worn pebbles in alluvial deposits left behind by floodwaters, this stone is only very occasionally mined directly.

Tough, durable, never enhanced or treated, it’s also easy to clean without causing damage, making it ideal for use in jewellery.

Intriguingly it is one of the few gemstones to have been first discovered in the U.S., though deposits have now been found in India and Africa too.